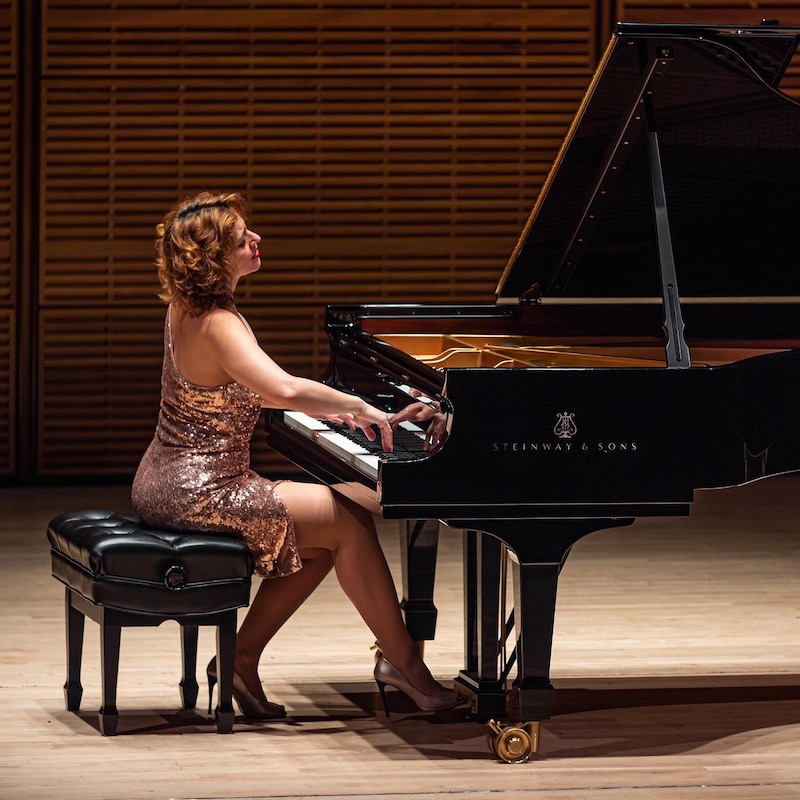 From Our Video Archive: Kariné Poghosyan

PCF Director’s Note:
Rising star pianist Kariné Poghosyan returned, to the Puffin on October 6 2016, following her tour to Vienna, Austria and Yerevan, Armenia. Ethnomusicologist Komitas Vardapet once stated, “Every nation’s greatest creators are its people; go and learn from them.” This is the inspiration behind “Folk Inspirations.” Program travelled to Norway with three pieces from Grieg’s Lyric Pieces, followed by Hungary with the gypsy inspired Hungarian Rhapsodies of Franz Liszt. Second half includes a glimpse at Armenian folklore with Komitas Vardapet’s three little gems from his Dances for Piano. Lastly, the program’s grand finale will go to pagan pre-Soviet Russia with the famous three movements from Petrouchka, by Igor Stravinsky.

Kariné Poghosyan:
In response to Ms. Poghosyan’s passionate playing, a critic once wrote: “If she had been born a few decades earlier, perhaps the Armenian-American pianist Kariné Poghosyan could have melted the Cold War.” With such ardent devotion to her art, she has been praised for her ability to “get to the heart of the works she performs.”

Ms. Poghosyan made her orchestral debut at 14, playing Beethoven’s Piano Concerto No. 1, and her solo Carnegie Hall debut at 23. Since then, she has gone on to win numerous awards and perform in some of the world’s most prestigious concert halls. During the 2014-15 season, she made her debuts in Washington D.C. and Toronto, Canada, where she performed the Canadian premiere of Alan Hovhaness’s Piano Concerto, “Lousadzak”. Other performance highlights included solo recitals in the Myra Hess series in Chicago, and in Ehbar Saal in Vienna, as well as performing Khachaturian’s Piano Concerto with the Greater Newburgh (NY) Symphony, under the baton of Woomyung Choe.

Her most recent orchestral performances include Schumann’s Piano Concerto with Sinfonia Toronto, conducted by Maestro Nurhan Arman, and Grieg’s Piano Concerto with the Wallingford Symphony Orchestra, conducted by Maestro Phil Ventre. Both performances received warm ovations and strong reviews. She was also featured in WQXR’s “Chopin Marathon” concert and live webcast, and was interviewed by David Osenberg on his award-winning program on WWFM, Cadenza.

David Dubal, the revered piano authority, author and radio host, said of Kariné’s exquisite handling of Khachaturian’s music, “She immersed herself in the piano music of Aram Khachaturian to such an extent that her performances have elevated the music to a higher sphere. I know this for certain as I have played many of these pieces and found details of inflection, rhythm and technical prowess that I had not imagined the music possessed. This is an important debut recording and it brings to us, in Kariné Poghosyan’s work, a pianist that we should hear as soon as possible in recital or on disc. Khachaturian would be excited to hear his colorful works played with such idiomatic styling. This is Khachaturian playing that will not be rivaled!”

Kariné Poghosyan is currently based in New York, where she teaches at Manhattan School of Music.