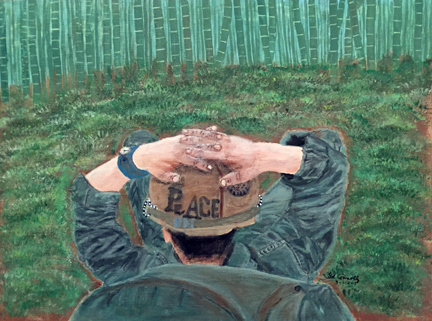 Vietnam on My Mind

The exhibition features a series of story-telling paintings by Nina Talbot titled “Veterans.” Talbot’s vision for crafting paintings of men and women who served in the military from World War II to Iraq and Afghanistan, is to “reveal how each individual veteran forever lives in the shadow of war…” The display will also include artwork by military veterans in the Combat Paper program and the Secaucus Vet Center Art Group. These artists include the show’s curators, Walt Nygard and Jan Barry, both of Teaneck; Frank Wagner, of Bogota; Joe Lis, of Union City; Jim Fallon, of Hoboken; David Keefe, of Montclair; Sarah Mess, of Branchburg; and a number of other veterans who live in various communities in New Jersey.

Nina Talbot is a New York-based artist who has shown in solo exhibitions at the U.S. Department of Veteran Affairs Museum, Brooklyn Historical Society, Brooklyn Public Library, and other sites. Works from her “Veterans” series are currently on display at the U.S. Army Heritage and Education Center in Carlisle, Pennsylvania.

Below is a selection of art from this show.