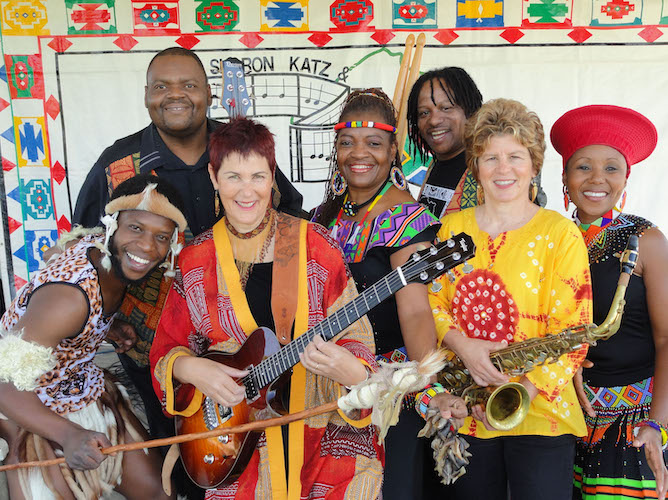 From Our Video Archive: Sharon Katz

PCF Director’s Note:
Sharon Katz is a longtime friend of the Puffin and she has graced our stage on many occasions. On October 5, 2018, Sharon came to Teaneck with her crackerjack band yet again to perform songs from her albums and her humanitarian project “Transcending Barriers.” The band was amazing and I wish we had a higher quality recording for you. But even this archive clip will get you rocking with Sharon Katz and the Peace Train!

Sharon Katz:
Musician activist Sharon Katz and the Peace Train roll into the Puffin on their never-ending quest to promote peace, progress, and understanding! Sharon Katz was born in Port Elizabeth, now known as Nelson Mandela Bay, South Africa. As a young teenager during the terrible apartheid era, she used to sneak out to the “Blacks Only” townships by hiding under blankets in the back seat of her friend’s car. There, she met with the now-famous actors in Athol Fugard’s group – John Kani, Winston Ntshona – and began her lifelong mission of using music to help break down the country’s artificially-imposed racial barriers.

Back in 1992, Sharon made history in her home country of South Africa when she formed the country’s first-ever, 500-member multi-cultural and multi-lingual performing group and staged the production called “When Voices Meet.”

Then in 1993, Sharon rocked the nation with her concert tour, “The Peace Train.” The first performance had been so successful and so widely publicized that invitations began pouring in from all over the country. To respond to all the requests, Sharon got sponsors to hire a train – The Peace Train – and took 150 of the performers, her friends Ladysmith Black Mambazo, as well as TV and radio crews on tour throughout the country. At each stop along the route, they performed their concert and encouraged people of all races, cultures, ages and political affiliations to put down their guns and hostilities and to prepare for the country’s transition to a peaceful democracy. The performing group became known as “The Peace Train” forever more, and all the world watched as Nelson Mandela became South Africa’s first democratically elected President a few months later.

Visit our From Our Video Archive playlist on YouTube here