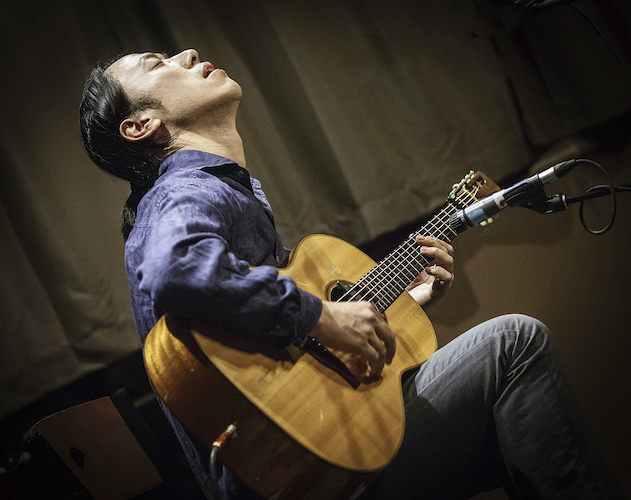 From Our Video Archive: Hiroya Tsukamoto

PCF Director’s Note: Hiroya Tsukamoto performed for us back in March 16, 2018 and filled our gallery with songs that permeate with a sense of peace, tranquility, and hopeful longing. Combining masterful fingerstyle guitar, and soulful songwriting, Hiroya’s intimate performance left listeners’ hearts thumping with impressions of experiences, and emotions conveyed through his music. Please enjoy this wonderful video from our archives and please purchase Hiroya’s latest album if you can. The current crisis has hit Hiroya and other traveling musicians especially hard since all booked concerts and tours have been lost. His album Window to the World can be purchase at: https://hiroyatsukamoto.com/product/w….

Hiroya is a one-of-a-kind composer, guitarist and singer-songwriter from Kyoto, Japan. He began playing the five-string banjo when he was thirteen, and took up the guitar shortly after.

In 2000, Hiroya received a scholarship to Berklee College of Music and came to the United States. He formed his own group in Boston “INTEROCEANICO (inter-oceanic)” which consists of unique musicians from different continents including Latin Grammy Colombian singer Marta Gomez. The group released three acclaimed records (“The Other Side of the World”, “Confluencia” and “Where the River Shines”). Hiroya has released three solo albums (“Solo”, “Heartland” and “Places”).

Visit our From Our Video Archive playlist on YouTube here.