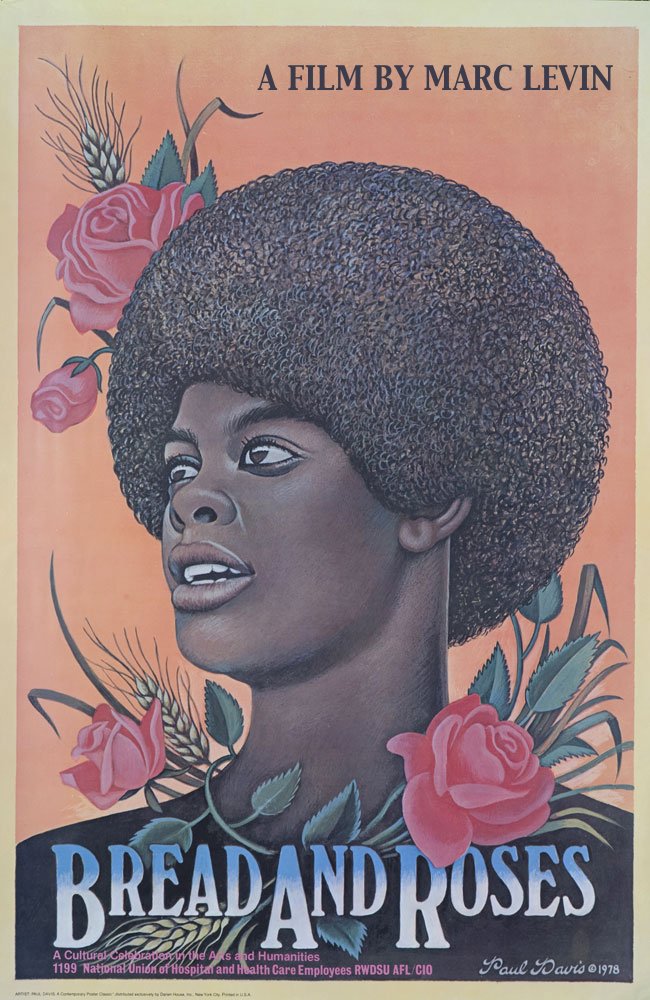 Puffin Cultural Forum presents a film screening of Bread and Roses, a 1979 Marc Levin film that chronicles the story of District 1199, the Hospital Workers and the Health and Human Service Union, who were and remain predominantly BIPOC women, and the beginnings of their unique “Bread and Roses” program. The film takes a look at the union’s political, economic and social struggles as they endeavor to bring music, art, and drama to the employees and their families, where they worked and where they lived.

COVID POLICY
• This event is open to a limited audience up to 50 persons.
• Proof of vaccination, ID, and properly fitting KN95 or N95 masks are required.
• Please review all our Covid and General policies here before attending.

More About the Film

Film features performances by Ossie Davis, Ruby Dee, Peter Seeger, Karen Akers, Stephanie Mills, Sam Levinson, Roy Brown, and Jane Fonda. Produced, directed, and edited by Marc Levin in 1979 as part of the Cultural Council Foundation’s CETA-funded Media Works documentary filmmaking team, Bread and Roses shows the beginnings of District 1199’s “Bread and Roses” program which was founded in 1979 by the late Moe Foner, Executive Secretary of the New York Health and Human Service Union, Local 1199 (now SEIU Local 1199), as a cultural resource for union members and students in New York City who would otherwise have little access to the arts. Special emphasis was given to programs that signify and interpret workers’ history while generating new artistic expression. The program got its name from the famous 1912 textile strike in Lawrence, Massachusetts, wherein workers marched with a banner proclaiming, “We want bread—and roses, too.” The roses here refer to culture and the arts, which enrich life in all contexts.


Marc Levin has won four Emmys, four duPont-Columbia awards, the Peabody Award, the Grand Jury Prize at Sundance and the Camera d’Or at the Cannes Film Festival, among others. Some of his filmmaking highlights include: Slam, his Sundance festival hit; Brick City, the groundbreaking docu-series about the city of Newark, New Jersey and its charismatic mayor, Cory Booker; Cable Ace winner, Gang War: Bangin’ in Little Rock; National Emmy-winner Thug Life in DC; and Chicagoland, an eight hour docu-series for CNN and Robert Redford, nominated for a 2014 IDA award for Best Limited Series.

Levin and his producing partner, Daphne Pinkerson, have made over a dozen acclaimed documentaries for HBO, including a revealing trilogy of films showing how economic forces have impacted working people. He was also Executive Producer on the Emmy Award-winning HBO documentary I Am Evidence and Baltimore Rising, which won the Cinema Eye Award for Outstanding Non-Fiction Documentary in 2019.

Most recently Levin directed Stockton on My Mind, following 29-year-old Mayor Michael Tubbs’ bold initiatives to provide more opportunities for the youth of his city, and I Promise, which chronicles the first year of the innovative Akron public school created by LeBron James and his foundation. Both were selected for World Premieres at the 2020 Tribeca Film Festival. I Promise was honored by the African American Film Critics Association as the Best Short Form Series of 2020, and Stockton on My Mind was nominated for an Emmy for Outstanding Current Affairs documentary. In 2021, Marc completed three documentaries as an executive producer, Adrienne and The Slow Hustle, currently streaming on HBO, and Kevin Garnett: Anything Is Possible, for Showtime.

Levin directed, produced, and edited the Bread and Roses film, while he was a member of the Cultural Council Foundation CETA Artists Project from 1978 to 1980.

Judith Berek, who became an active member of 1199 and joined the union staff as an organizer in 1968, ultimately serving as Union Lobbyist and establishing its occupational safety and health program. She focused on the “bread” of Bread and Roses, setting up a series of labor management programs to improve patient care in nursing homes and hospitals. Berek was also a founding member of the Coalition of Labor Union Women, where she sat on the national board and served as President of the New York City chapter. Her union activities led to her first political campaign engagement, supporting Shirley Chisholm’s initial congressional campaign.

Berek left the Union in 1983 and joined the Mario Cuomo administration in the Department of Social Services (DSS), ultimately in the role of Deputy Commissioner for Adult Services. She took a leave of absence from DSS to serve as David Dinkins’ deputy campaign manager in his successful bid for mayor. Berek worked in the New York City Human Resources Administration during the Dinkins Administration, then moved to Washington to work in the Health Care Financing Administration (HCFA), where she set up Operation Restore Trust, the first joint program integrity program in Medicare and Medicaid. Berek returned to New York to head the HCFA regional office, where she remained until she retired.

Since retirement Judy has consulted for the 1199 Labor Management project and the New York State Nurses Association. She also bakes bread and cookies more often than anybody needs to, and is working on writing a cookbook.

Esther Cohen, who became Creative Director of Bread and Roses under Moe Foner. Cohen served as Executive Director of the program for 14 years, where she created “Unseenamerica,” a national project for workers. She writes, teaches, and is a cultural activist.


Molly Garfinkel directs City Lore’s Place Matters program, a wide-ranging public history and advocacy initiative working with communities across the five boroughs. Her work includes research and publishing, cultural resource management, exhibition curation, public programming, and education. She is particularly interested in building traditions, theories of cultural landscapes, and histories of urban planning and activism. Garfinkel holds a BA in Art History from Wesleyan University and an MA in Architectural History from the University of Virginia.