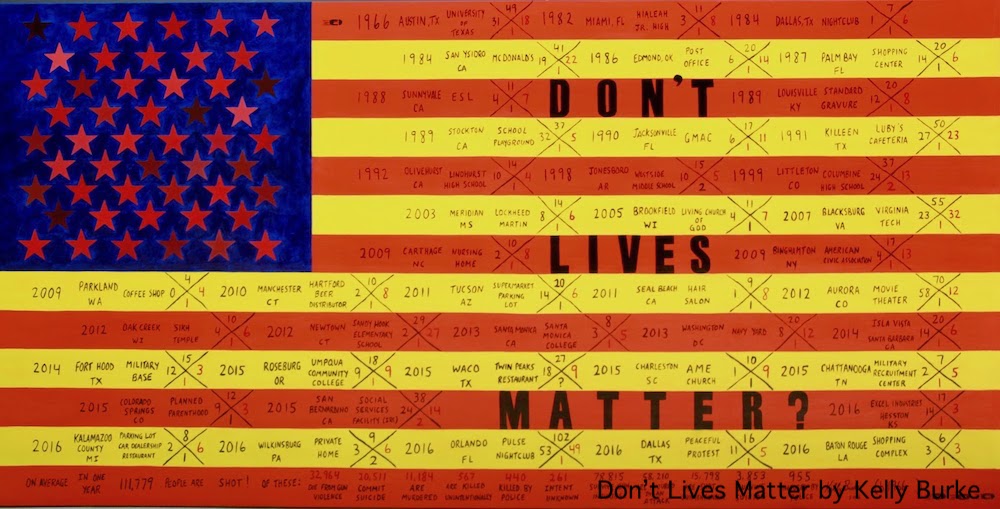 “This US flag symbolizes lives lost due to gun violence. Alternating the stripes in orange and yellow symbolizes the colors we use to indicate safety (so that people don’t shoot you in the woods) and caution (once someone has already been shot). The stars in “50 shades of red” represent the pain, suffering and grief as well as anger, rage, and despair people experience having lost loved ones. Integrated into the stripes, the dates, place names, and numbers of deaths from mass shootings from 1966-2016 to illustrate how greater access to military-grade weapons has led to more massacres. The Xs quote the X-code FEMA used on houses during the Katrina disaster to indicate from left going clockwise the following information: 1) the rescue unit #, 2) date investigated, 3) what was found, and 4) # of survivors and dead. The numbers in the Xs on this flag indicate from left going clockwise the following information: 1) the number of survivors (in black), 2) the total number of casualties (in black, not including the perpetrators), 3) the number of innocent people killed (in red), and 4) the number of perpetrators (in black if survived, in red if killed or committed suicide). One bullet begins the sequence in the upper left corner and three bullets form an ellipsis at the end indicating the inevitability of more mass shootings in our future without any substantive efforts to control guns or improve gun safety in the US.”

This piece is from our 2019 exhibition “Measured Hate.”