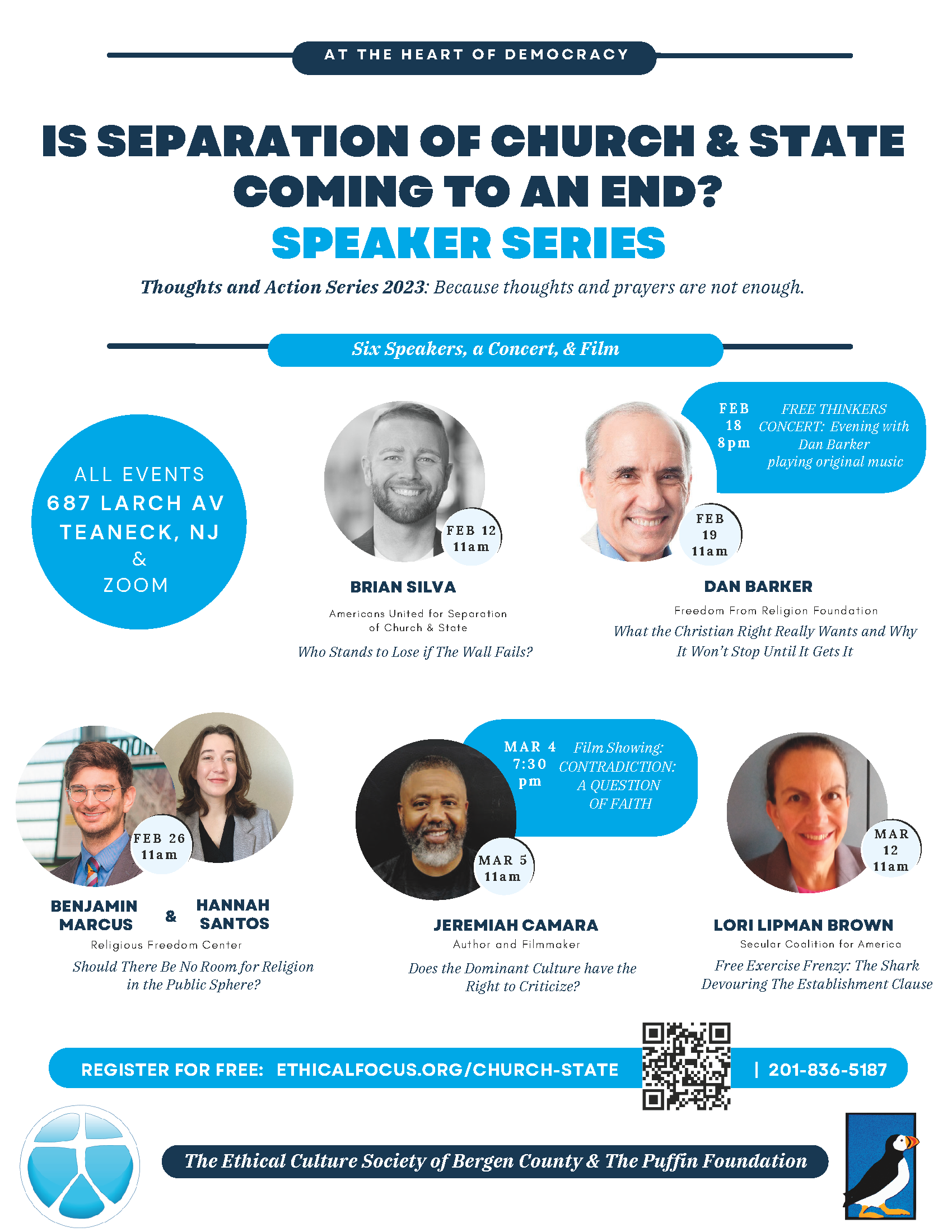 Co-Sponsored Speaker Series: Is Separation of Church & State Coming to an End?

The series, hosted by The Ethical Culture Society of Bergen County and co-sponsored The Puffin Foundation, is part of the Thoughts and Action Series 2023, because thoughts and prayers are not enough.

All events are at the Society’s meetinghouse, 687 Larch Ave., Teaneck, NJ, and on Zoom. Registration is not required for in-person attendance.

Those who register will receive the Zoom link and a weekly reminder of events in this church-state series, February 12 through March 12, 2023.
Register for the series here.

Who Stands to Lose if the Wall Fails?  The Real Life Consequences of the End of the Establishment Clause

Brian Silva, vice president of Outreach and Engagement at Americans United, has three decades of organizing experience rooted in creating change through education and advocacy that is intersectional, collaborative, and grassroots. Read more.

Should There Be No Room for Religion in the Public Sphere?

Benjamin Marcus is a Freedom Forum fellow. He served as the religious literacy specialist with the Religious Freedom Center of the Freedom Forum, where he developed religious literacy programs for public schools, universities, businesses, and government organizations. Hannah Santos is a Youth Organizing Fellow at Americans United for Separation of Church and State. Read more.

Film: ‘Contradiction: A Question of Faith’

Jeremiah Camara will discuss the role of religion in both helping and holding back Black Americans in their push for equity and inclusion. Camara is the author of the books “Holy Lockdown: Does the Church Limit Black Progress?” and “New Doubting Thomas: The Bible, Black Folks & Blind Belief.” Read more.

Does the Dominant Culture Have the Right to Criticize?

Returning speaker, Jeremiah Camara is a creator of the widely watched YouTube series, “Slave Sermons,” and created the documentary film “Contradictions: A Question of Faith,” examining the saturation of churches in African-American communities co-existing with poverty and powerlessness. Read more.

Lori Lipman Brown, who will discuss recent judicial and legislative actions that increase religion’s influence on civil law, served as the first director of the Secular Coalition for America (2005-2009) and is on its board of directors. She is the author of a chapter in “50 Voices of Disbelief, Why We Are Atheists,” and is quoted extensively in “American Secularism, Cultural Contours of Nonreligious Belief Systems.”  Read more.

Register for the series here.